The land on which the Dargahs, a Masjid and a huge commercial complex are situated was the battle field of the Third war of mysore between the armies of HazrathTipu Sultan Shaheed (RA) and the British.

These two Sufi Saint warriors were laid to rest at the battle field and Dargahs were constructed on their tombs. A Masjid also came up near the Dargah. The land measuring about 4 acres surrounding endowed by HazrathTippu Sultan (RA) for maintenance of Dargahs and Masjid. 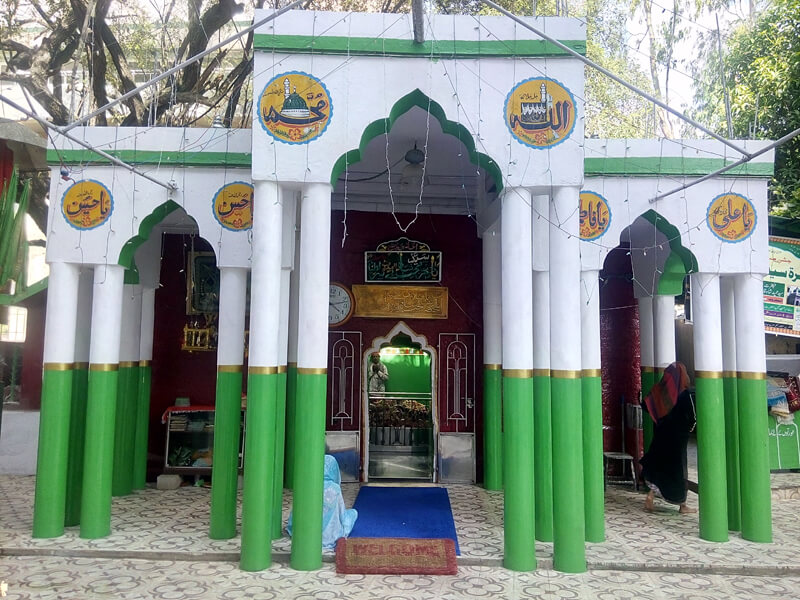 The administrative office of the Dargah is located on the First floor of the complex for looking after the day-to-day management and maintaining proper accounts of the revenue of the institutions.

The waqf contribution assessed every year is paid regularly to the Karnataka State Board Of Auqaf.

The portion of land leased out to Central Muslim Association of Karnataka, the lease agreement is executed by the Karnataka State Board of Auqaf, Bangalore. When the institution was under the direct management of the board and the lease period was fixed for 35 years commencing from 30.10.1985 and the area is around38,750 Sq.ft Central Muslim Association are doing the good job they are providing the education to the girls in the name of Abbas Khan College for Women, Bangalore. It is a long leased property of the HHS & HMS Complex.

Karnataka State Board of Auqaf, has constituted the advisory committee with Administrator on 12.09.2014 along with five members. Janab G.A Bava, Rtd. DCP as Administrator ,Janab Mubeen Munaver, Janab Abdul Azeez , Janab Syed Rasheed Ahmed, Janab Shaik Fazilulla are the members of the committee. During this period the following are the achievements of the committee.

1. Valuation of the property of HHS & HMS Complex Premises was done by appointing a property valuer, Mr. Hafeezullah. The prevailing rental value in the area is between Rs.80/- per sq.ft to Rs. 150/- Per Sq. ft as per the valuer.

2. Team of members along with the administrator visited Medi Agrahara Village and spotted out 78 acres of goumalaland and to start up the fecing work immediately.

3. Scholarship to the meritorious and deserving students.

4. Financial Assistance to the needy and deserving patients.

5. Various coaching classes was conducted for the better future of the community candidates.

6. Aasar-E-Mubarak was celebrated in Gumbad Masjid every year.

8. Arrangement of Ifthar in the HHS & HMS Gumbad Masjid for the interest of the visiting musallies every year.

9. The management is giving hard to improve the revenue of the above Institution by revising the old rents being paid by the tenants with an intention to spend the additional revenue for the benefit of poor community meritorious students to built their career.

10. The management have proposed to construct 3rd floor with an plinth area of 40,000 Sq.ft which will fetch an additional rental income of 20.00 lakhs per month. The Central Wakf Council team New Delhi has visited and assured a loan of Rs.5 crores for the construction of 3rd floor.

Managing Committee has decided to construct the Industrial Training Institute at the premises of HHS & HMS Complex, Janab Nasir Aziz Sahib, Convener Estate and Construction Committee produced the architectural drawing and structural designs and construction of I.T.I was started on 11th November 2016.

Before this committee there is only ground floor it is difficult for musalies for performing prayer. So committee was decided for extension of first floor of Gumbad Masjid. President, Janab G.A BavaSaheb, arranged for dua ceremony on 3rd March 2017 after Assar Namaaz by inviting Maoulana Shamshul Haq Hussainy Saheb Imam –o- Khateeb, of Lakkad Shah Masjid, Bangalore. Started the work after 3rd March 2017. This construction is completed and was inaugurated on 22.02.2018.

The following guests are present at the time of inauguration.

Duwa by: Moulana Habib Ur Rehman

An wazoo khana exists adjacent to the masjid the present managing committee has renovated with the modern facilities for the mussalies visiting to the masjid, the foundation stone of wazoo khana was laid by Rahaman khan Rajyasaba ,MP, on 11/11/2016 & it was inaugurated by JanabTanveerSait, Primary & Secondary Education minister, and Duwa ByMoulanaHabeeb Ur Rehman Dated: 22.02.2018.

Providing free dialysis for poor and needy peoples for all communities with P.P.P Project. We are delivering free dialysis service which is back bone of health, by making the service more available to all, to ensure better health outcome, under the clinically skillful and competent medical condition focusing on promoting healthy life style, under the supervision and services of qualified and trained medical and nursing staff the formula is to ensure right treatment is administered at right time. Shree Ramesh Kumar, Minister for health was kind enough to help to open the free dialysis center.

Providing free treatment for out patients with free consultation medicines will be supplied free along with the diagnosis.

Girls Hostel is constructed by Mr. Ziaulla Sharieff and donated for the poor and needy Muslim girls in the land of HHS & HMS Complex. 1 crore has been allotted on 31.12.2015 in the budget by the Govt. of Karnataka when Shree Siddramaiah was Chief Minister of Karnataka for the infrastructure and other work for the girls hostel.